Our Minnesota Department of Natural Resource’s recent decision for “moose-first” management of whitetails in our vast Arrowhead Region is based on the following: ongoing research has strengthened the understanding of disease and parasite transmission from deer to moose. Deer are the primary host which transmit fatal brain worm and liver fluke infestations to moose. Managing deer at lower, but stable numbers in primary moose range will reduce disease transmission and allow for habitat and other management activities to benefit moose.

Our state deer managers now intend to keep whitetail numbers below twelve per square-mile, the current believed maximum that should be allowed in deer/moose ranges. In this once great whitetail hunting region where deer numbers have long been less than half of numbers in most other regions in Minnesota, rather than continue to use “bucks only” hunting seasons to improve deer numbers, Minnesota hunters will now be allowed to take whitetails of either sex. It remains to be seen whether this plan will actually help improve or maintain current moose numbers. I personally believe it will fall short for two reasons.

First, whitetails are not the “only” primary hosts of brain worm infestations in northeastern Minnesota. Moose are also primary hosts. Not all infected moose die from brain worms. If all deer were somehow removed from the Arrowhead, infected moose hosts will continue to transfer potentially fatal brain worms to other moose. If whitetails not infested by brain worms were then allowed to again inhabit the same region, countless deer would soon become infested by brain worms, thanks to the presence of the primary hosts, infected moose. Which animal would then be blamed for the transmission of this disease? It doesn’t seem logical brain worm infestations among moose can be eliminated by eliminating or greatly reducing numbers of other animals living in the same region that also happen to be infested with brain worms.

The other reason is, despite being unaffected by brain worms, deer numbers in northeastern Minnesota have been unusually low in northeastern Minnesota for decades (in turn affecting moose numbers) because they are the primary prey of a now (arguably) historic high number of grey wolves in this region — made evident by the recent unprecedented, rapid expansion of the grey wolf geographic range into neighboring states. With deer numbers long being significantly lower than twelve per square-mile in the Arrowhead Region, exacerbated by recent severe winters, it is only logical our overabundant grey wolves have been forced to increase their hunting pressure on moose (plus domestic cattle), and this contributing factor to the demise of moose in northeast Minnesota will not likely change if deer numbers are reduced further or maintained at present levels.

Understandably, our MDNR game managers and most Minnesotans would agree something should be done to save our state’s fabled moose population. However, it is difficult to imagine allowing hunters to take does in the Arrowhead Region — where deer numbers have been substantially lower than twelve per square miles for decades and where as few as one deer have been taken by hunters in many ten-square-mile areas during recent hunting seasons — can significantly benefit moose. Unless something better is discovered that can break the chain of natural events that lead to infestations of brain worms in moose, these magnificent animals may inevitably become rare in Minnesota deer/moose ranges no matter what else is tried to prevent it. To make matters worse, recent studies suggest climate change may also be a mitigating factor.

Meanwhile, those of us who have long hunted whitetails in our Arrowhead region will again experience tough deer hunting this fall, probably next fall and perhaps many falls after that, all because of a worm and U.S. politicians who continue to ignore a long existing bill in Washington that needs to be passed in order to delist wolves as an endangered species in northeastern Minnesota.

It’s August 31, a momentous day in the lives of all antlered whitetail bucks. A few days ago, hormonal changes that were set in motion in whitetail bucks by a certain ratio of darkness to sunlight (photoperiodism) in July caused the blood flow to velvet covering their now completely developed anthers to shut down. This caused velvet to begin rotting, in turn attracting hordes of flesh-eating insects such as flies and yellowjackets. 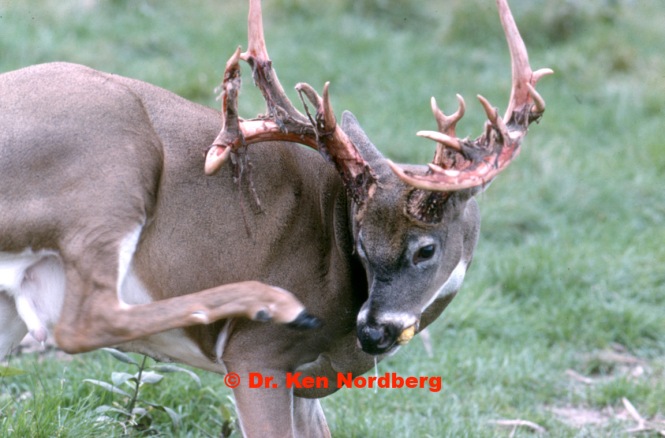 Adding to a buck’s discomfort at this time is a different annoying horde — bot fly maggots crawling around in its nasal passages and sinuses.

Buck sweeping antlers through milkweeds to remove blood and tatters of velvet from antlers.

When a resting buck can stand all this no longer, it will leap from its bed, rush to a nearby woody bush or small diameter tree and begin vigorously rubbing bloody velvet from it antlers, after which it will sweep its antlers from side to side in tall grass or other dense vegetation in an attempt to remove remaining tatters of velvet and blood. Usually, however, it takes three days to finish the job. 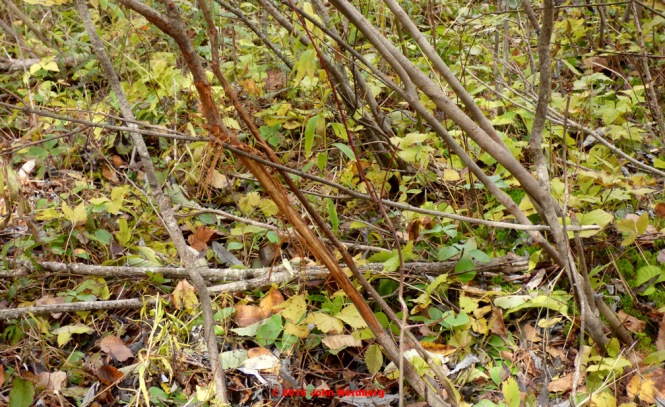 Dried rubs like this on small multiple stems found in September or October are made by mature bucks shedding velvet. They are usually found near buck bedding areas. 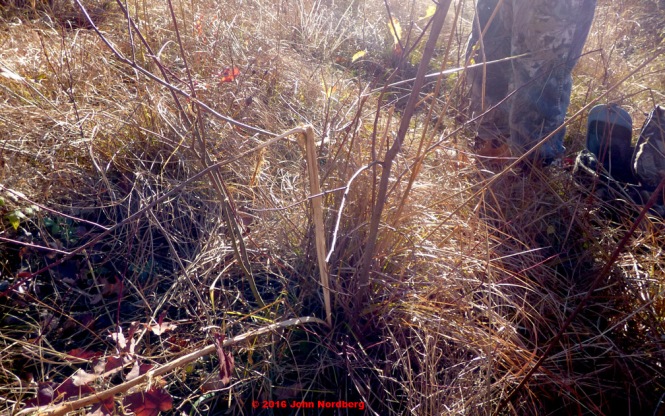 Immediately thereafter begins the season during which antlered bucks begin to battle for highest possible positions in their square-mile buck pecking orders and the right to breed.

Note: velvet rubs made in early September are almost always found in or very near buck bedding areas.