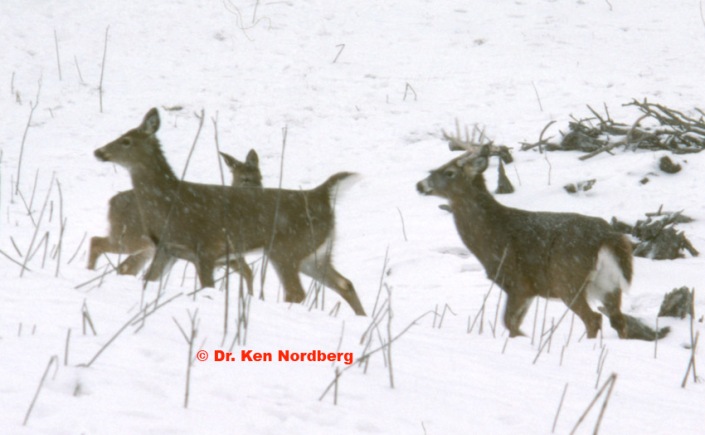 A killer buck. This buck killed another 10-pointer a couple days before this photo was taken.

The second two-week period of whitetail breeding, generally occurring during the first two weeks of December, is now in progress. Only about 10% of yearling and mature does are bred during this period (about 1 doe per 2 square-miles), meaning, there are days during this period when there are no does likely to be in heat. Deer signs that indicate breeding is happening include:

For any of these signs to be a useful as a downwind or crosswind stand site, such signs must be fresh and taken advantage of quickly because does are only in heat and able to be successfully bred during a short period of 24–26 hours. Skilled stand hunting adjacent to sites where does and their young are currently feeding (sites with lots of fresh, off-trail tracks, droppings and nipped-off (ragged and white) stems of woody shrubs and young trees (or farm crop residues) provide better than average buck hunting success. Following days of bitter temperatures, strong winds and/or heavy snow, be sure to hunt midday (10 AM to 3 PM) during thaws or near-thaws while the wind is calm or light. Every deer in the woods will be on the move, feeding (browsing), for an hour or two. 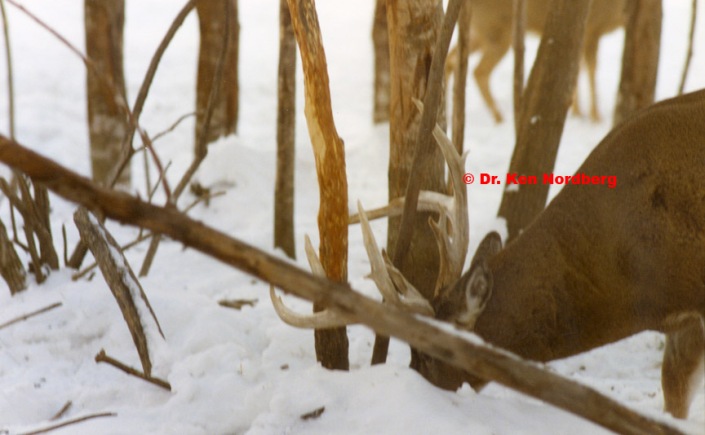 Right now —10/24/2017 — antlered whitetail bucks from yearlings to dominant breeding bucks are making and renewing antler rubs and ground scrapes — no trespassing signs of their intended breeding ranges meant to warn other bucks to “keep out.” Very soon, however, the most dominant buck of each square mile buck pecking order will force all other antlered bucks to abandon their home ranges until November breeding is over. Yearling bucks will sneak back to their mothers, however, yet being dependent on them for leadership and direction when something dangerous such as an enraged dominant breeding buck is near. Some mature bucks are likely to return prematurely as well. This forces dominant breeding bucks to keep to keep musk odors deposited on their rubs and scrapes fresh and strong, renewing them every 24-48 hours (making them currently vulnerable to skilled stand hunting at scrapes) and searching around the clock for bucks that dared to return, then running them off again. Meanwhile, dominant breeding bucks will also visit mature and yearling does within their newly established 1–2 square-mile breeding ranges once or twice daily during feeding periods, anxiously awaiting the first discovery of airborne doe-in-heat pheromone, indicating the first of the three two-week periods of breeding (in November when 85% of does are bred) has begun (November 3rd where I hunt). Remember, however, making and renewing ground scrapes by antlered can be temporarily halted by unusually warm weather, strong winds, storms and discoveries (via sight, sounds or scents) of tree stand hunters near ground scrapes. Remember too, once breeding begins, dominant breeding bucks have little or no time to renew scrapes. In November, then, especially if your intended quarry is a trophy-class buck, key instead on current feeding areas of does. There, yearling and mature does are sure to be accompanied by one or more mature bucks during the short 24-26 hours each is in heat.