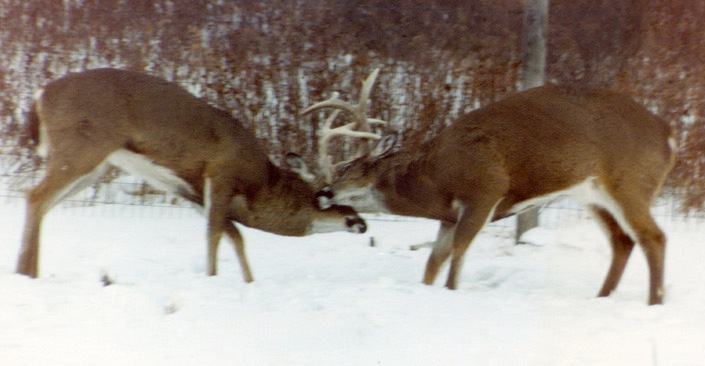 Evidence of a recent buck battle on a deer trail — torn up ground and scattered leaves — from 2017 scouting.

It is every antlered white-tailed buck’s number-one desire to become most dominant within the square mile it shares with 5–9 other antlered bucks (including yearlings). Dominance is achieved by winning shoving matches with other bucks, antlers engaged. Losers are bucks pushed backwards significant distances and/or forced leap way to ease pain or avoid injury (its neck being twisted or its head or neck being stabbed by an opponent’s antler tine). Battles between antlered bucks become most fierce and prolonged during the first two weeks in October, fueled by male sex hormone, testosterone, welling in their bloodstreams, making them increasingly aggressive toward one another. Most battles occur during hours whitetails normally feed in feeding areas shared by all antlered bucks in each square mile. All but one achieves a measure of dominance by defeating one or more other bucks. By mid-October, a well recognized pecking order is established in each square-mile, generally remaining the same throughout the following year year. The buck that conquered all others becomes the dominant breeding buck. It gains the exclusive opportunity to breed all yearling and mature does living in its square mile while they are in heat two weeks in November and two weeks in December by forcing all bucks it conquered to abandon their home ranges shortly before breeding begins and remain off-range until breeding has ended. In this way the fittest of bucks pass on their superior genetics, aiding in keeping mature whitetails the amazingly elusive and adaptable animals they are.