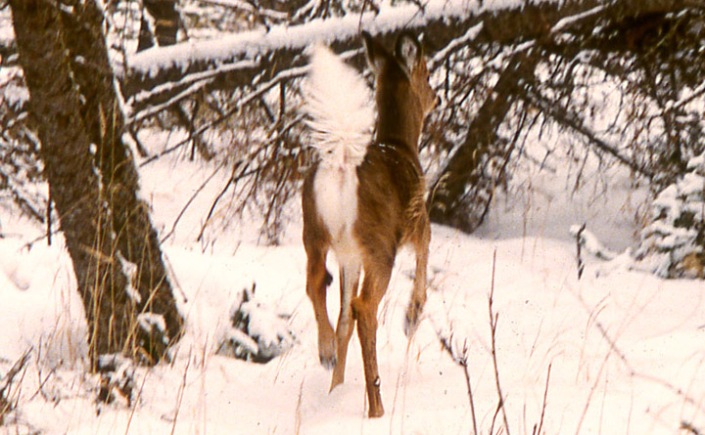 Nothing alarms a mature whitetail more than seeing or hearing a hunter sneaking toward it, halting often to scan ahead. Simply halting suddenly within sight of a deer and gazing toward it or suddenly changing course and walking directly toward it can be equally alarming, whether the hunter actually realizes a deer is there or not. Such are typical actions of wolves that have selected a deer as a prey or much more easily detected human deer hunters making a drive, still-hunting or stalking. The consequences are generally severe, whitetails reacting by bounding away as rapidly as possible through forest cover, becoming extremely difficult targets. Worse, most mature whitetails then quickly flee to off-range areas seldom invaded by hunters, swamps or posted lands, for example, or they become nocturnal (move about in darkness only).

If on the other hand you area a non-aggressive stand hunter, unless your silhouette is obvious against the sky or a snowy background, you are spotted or heard moving or a deer is downwind and able to smell you, not only are you far less likely to be discovered by an approaching or passing whitetail, but even if you are discovered, a whitetail is unlikely to become alarmed enough to abandon its range or become nocturnal. Thereafter, generally occurring without hunters realizing it, the deer will simply stay out of sight or keep a safe distance away from the spot where the hunter was discovered. To effectively counter this evasive action, move to a new stand site at least 100 yards away daily.