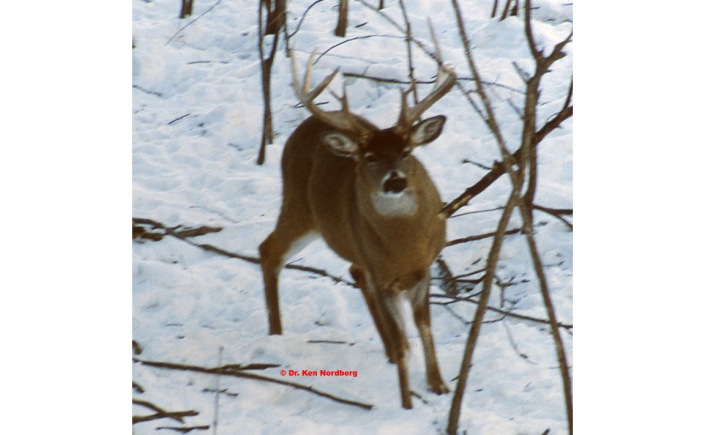 Whereas whitetail fawns and yearlings do not think about it much and many 2-1/2 year-old bucks consider merely being out of sight of a hunter to be safe enough, while not bedded most bucks 3-1/2 to 6-1/2 years of age (few live longer) and many does 2-1/2 years of age or older are firm advocates of “the 200 yard rule” — responding in some way to avoid discovery by an approaching hunter currently about 200 yards away. It’s not a 100% effective rule because hunting humans cannot always be heard, seen or smelled that far away. Whenever possible, however, an older, experienced whitetail will always somehow react upon detecting and identifying a hunter about 200 yards away. If not moving toward the deer, it will generally ignore the hunter. If the hunter is drawing nearer (typically made evident by sounds characteristic of big-footed human hunters moving on foot), however, an older experienced whitetail will become prepared to do something to avoid discovery by the hunter. At first it may merely remain where it is and continue whatever it was doing, feeding for example, but during the following 15–30 minutes it keep extra alert in order to monitor the progress of the hunter. Once it appears the hunter will definitely close within 100 yards, the deer will begin moving away. If sounds indicate the hunter is moving non-stop, therefore not currently hunting, the deer will not usually move far, merely moving to nearby cover out of the approaching hunter’s path where it can watch the hunter pass. If sounds made by the hunter are often interrupted by short periods of silence, indicating the human is often halting, therefore hunting, the deer will silently vacate the area before the hunter is near enough to realize it, after which it will not likely return to the same area four or more days. The 200 yard rule thus enables mature whitetails to regularly out-maneuver unsuspecting hunters without the need for haste or the need to abandon their home ranges (a hunt-ruining response).