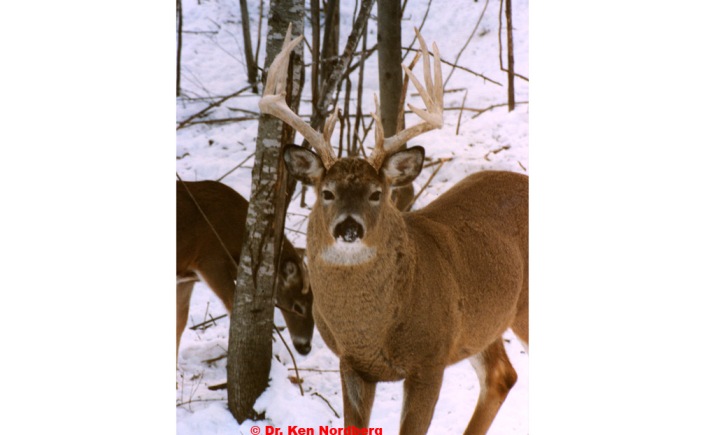 If you see some deer in your hunting area during a hunting season, it is natural to assume you are capable of seeing all deer there. Within suitable whitetail habitat, however, it’s impossible. There are 15–30 deer per square-mile in your hunting area and about 40% are antlered bucks. You’d have to be exceptionally lucky, very knowledgeable about whitetails and their habits, very skilled at hunting and have lots of time to hunt to see half of them during the course of a hunting season. The seen half would include many inexperienced fawns and yearlings and the unseen half would include most of the mature bucks and many of the mature does. The luck part is best where few if any hunters wander about on foot from dark to dark (“Stirrin’ ‘em up,” as they typically like to say with a grin).

It’s also natural to imagine the stand where you took, or nearly took, a big buck last year will be a great place to take a big buck this year. Though I’ve hunted whitetails 71 years, I still waste opening mornings at such sites, hoping it’s true. It rarely turns out that way, however. There are lots of reasons. Big bucks do not make the same serious mistake twice. In fact, during hunting seasons they rarely use the same trail twice in several days and they travel off-trail more than 50% of the time. Sites where they once encountered danger from hunters are routinely avoided and checked for danger from a safe distance downwind as they pass, year after year. This is basic survival behavior for whitetails that have survived three or more hunting seasons. Stand sites that were once productive, or nearly productive, inevitably become unproductive because mature whitetails are better at figuring you out than you are at figuring out them. Moreover, younger deer imitate their actions, thus learning to avoid you before before they’ve ever encountered you.

Previously productive stand sites can be productive soon again soon if a passing intended quarry (and all other deer) do not realize a hunter is near, or the intended quarry is successfully taken. It may take a couple of years for a mature buck to find and adopt the home range of mature buck that was taken by a hunter or died because of old age during the following winter and begin using sites and trails favored by the previous buck (usually for good reasons). Once this happens, a once productive buck stand site can become productive again (made evident preseason by annual scouting). The changeover from buck to buck can be rapid where deer numbers are great or slow (take two or more years) where deer numbers are low.

Where stand sites are overused, becoming productive again can take years. I know of two stand sites that once enabled one of my sons to take big bucks (half for the wall) two sets of five seasons in a row (ten in ten years) that are still unproductive 14 years later. If any whitetail, antlered or not, becomes alarmed enough by a hunter to quickly abandon a stand area successfully, trotting or bounding with its tail erect and/or snorting, the stand site is likely doomed for one or more hunting seasons.

Not uncommonly (for my sons and I), a new stand site that has all the characteristics of a dynamite spot to take a big buck will turn out to be a dud on opening morning. It isn’t likely because the hunter was mistaken about the site. There are lots of reasons why older bucks may be temporarily spending time elsewhere, accompanying a doe in heat a mile away, for example. Rather than hunt at the same site for an entire week, using the same trail to get there once or twice daily, almost certain to completely ruin the site for hunting, my sons and I have often been rewarded by abandoning such a stand site after one day of unsuccessful hunting and then trying it again 4–7 days later (it worked for my sons John and Dave this past season).

Generally, though we still find it difficult to avoid using a stand site on opening day where a big buck was taken or should have been taken the year before, we each begin each new hunting season with several new stand sites: many never-used-before (generally best) and some that haven’t been used for several years (all near fresh signs made by mature bucks). We also each begin with at least three different bucks to hunt. Doubtless these are major reasons we are successful at taking our agreed-on limit of four mature bucks per hunting season (to prevent overhunting of bucks).