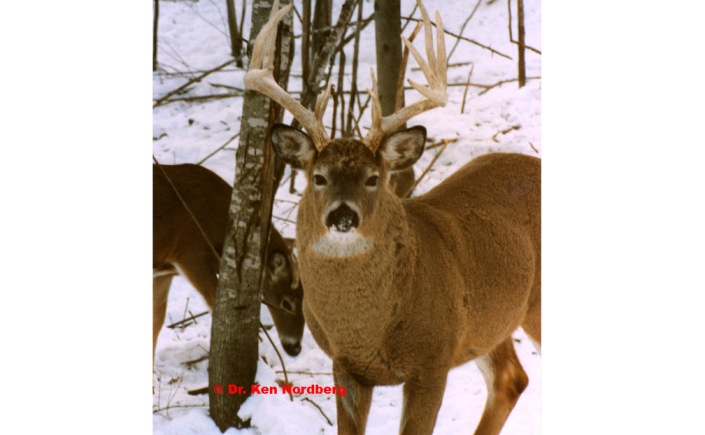 The above lament is common wherever whitetails are hunted. The trouble is, though during a hunting season most hunters see very few of the most elusive of whitetails, bucks 3-1/2 years of age and older; and depending on what a hunter defines as a “big buck” and the size of the area the hunter hunts, the above statement may actually be true but nothing can be done about it. Why? Because unless fenced in, big bucks, not humans, decide how many big bucks live in any one area. If a dozen or more were stocked in any square mile of suitable, unfenced habitat, within a very short period of time, only one is likely to be found living in that area.

The distribution of the various classes of whitetails is fairly consistent wherever they live. Take does. In forested regions does two years of age or older accompanied by their fawns and yearlings live spring, summer, fall and early winter in areas averaging about 125 acres in size (occasionally traveling off-range for a few reasons). Each range is separated by a surrounding buffer (no doe) zone. Where numbers of deer are high, doe ranges can be as small as about 90 acres and where numbers are low, they can be as large as 250 acres. Except in temporarily shared feeding areas between their ranges such as clearcuts and farm fields, does with young can be quite vicious when defending their home ranges from invasions by other does with young, including former young. In farm regions doe home ranges can be considerably smaller and even shared with other does with young until farm crops are deer tall, after which their ranges expand to more normally sized, separate ranges.

Now bucks. In early spring (after snow melts) bucks two years of age establish their first individual home ranges, typically about 300 acres in size. Two-year-old bucks seeking their first ranges typically end up traveling many miles before finding a suitable range not inhabited by an older buck (nature’s way of preventing in-breeding). Most grouchy mature bucks are not inclined to share significant portions of their ranges with newcomers.

During succeeding years, buck ranges become larger. On becoming dominant breeding bucks, typically at age five when bucks are in their prime (sometimes earlier), their ranges are about 600 acres in size (about a square-mile) and somtimes more than a thousand acres in size (up to two square-miles). In farm regions, though typically narrow, ranges of dominant bucks can be several miles in length. Normally, unlike doe ranges buck ranges overlap to varying degrees with ranges of other mature bucks. They also overlap or include entire ranges of does with young. Usually, there are 4–5 entire doe home ranges within the square-mile range of a dominant breeding buck.

Be sure to read my next related blog.