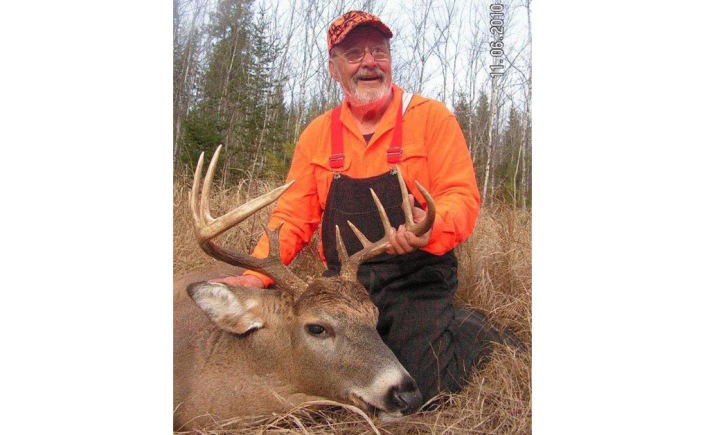 Some older bucks I have taken during the past two decades were walking past or approaching on one of my stand site approach trails — always originally pre-existing deer trails. Before a hunting season begins, older bucks and other whitetails don’t seem to mind sharing their trails with me, especially trails I have altered a certain way 2-3 weeks before a hunting season begins. My altering merely consists of removing from my trails fallen twigs and branches that are likely to snap loudly when stepped on. This plus my habit of bending my knees, lifting my boots well off the ground and then putting my boots down lightly beginning 100-200 yards from a stand site makes it difficult for whitetails near my stand (feeding) to recognize any softened footsteps they might hear as being those of a human hunter. If they can’t positively identify me as I approach through dense cover, they won’t abandon the area.

As I subsequently discovered, older bucks quickly adopt deer trails I have cleaned, likely pleased to find a trail that enables them to move with relative silence too. Upon discovering a buck is doing this (via its fresh tracks), before or after a hunting season begins or upon discovering its tracks in the beam of my flashlight in the snow ahead while heading to another stand site early in the morning), I will usually continue past the site without pause, planning to approach it from a different direction, downwind or crosswind, and sit where well hidden by intervening cover 20–50 yards away. The first two times I tried this, I was caught by complete surprise, suddenly finding myself staring into the eyes of huge, astonished bucks 10-15 yards away, which immediately whirled and disappeared into dense evergreens before I could fire. Today, several very nice bucks now stare at me from the walls of my office because I was ready for them the moment they appeared under the same circumstances.

The unusual tactics my sons and I use while stand hunting near trails used by mature bucks contribute greatly to our hunting success. We change stand sites every half day unless we have a compelling reason for hunting at the same site an additional half day. Bucks we hunt must therefore search for us again, which they do, sometimes fatally, every half day. Sometimes we take a buck by returning to a promising, previously hunted stand site after keeping well away from it for a week or more. Beginning one hour before sunrise every morning, we sit waiting for first light and legal shooting time (seated on our backpacked stools — something you can’t do with tree stands) well hidden by natural, unaltered cover within easy shooting distance downwind or crosswind of a deer trail marked with very fresh tracks and/or droppings made by an unalarmed (not trotting or bounding) mature buck. Though all this makes it possible for us to take one or more mature bucks every hunting season, many bucks we take come from a different, more productive location.