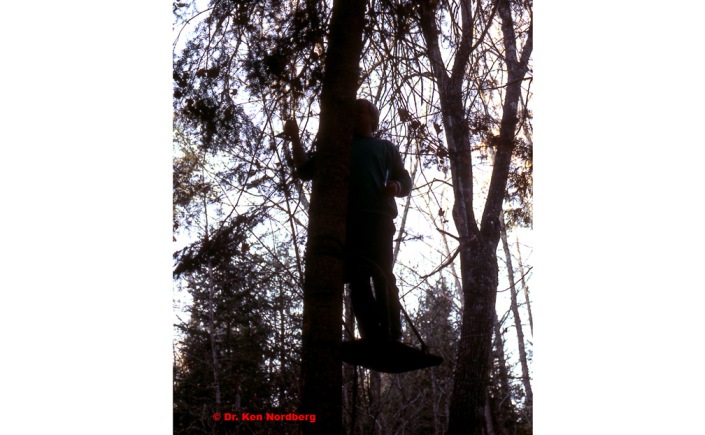 The dark silhouette of a hunter against the bright sky is readily recognized by today’s mature whitetails.

Once you are settled at your stand site, you are still not safe from discovery by feeding deer. Though I am sure there are many tree stand hunters who are very skilled at hiding their silhouettes in trees, the only two I personally know who are consistently successful at doing it are my sons Ken and Dave. When not well hidden, today’s mature whitetails are almost certain to spot and identify a stand hunter soon. Common reasons are as follows.

While a hunter is properly stand hunting downwind or crosswind of where deer are expected to be seen, whitetails are likely to pass within 200 yards behind the hunter, downwind. An unseen downwind mature whitetail is certain to positively identify the hunter for three common reasons:

Remember, though downwind whitetails are unlikely to react with much fear upon discovering a stationary stand hunter (unless very near), strong unusual odors substantially increase the odds of triggering great alarm in a deer, which in turn can quickly spread throughout the vicinity of the hunter’s stand site and ruin hunting there for the rest of the hunting season.

An unnatural sound can have the same affect. Common ruinous sounds at stand sites include coughs, sneezes, nose blows, snoring, zipping a zipper, opening Velcro™, squeezing shut a coat snap, sounds made while installing a portable stand in a tree (clanks, rattles, clunks, chopping and sawing), loading a cartridge into a rifle chamber, a click made by a rifle safety when moved to its “off” position, a click when improperly cocking a carbine, bumping a rifle barrel against something or opening a can of pop. All these sounds and more can heard by whitetails greater distances away than hunters realize, the most ruinous of them being metallic sounds.

Upon discovering the location of a stand hunter, a mature whitetail will never forget it. Mature whitetails have excellent memories. Whenever near a remembered stand site thereafter (then deliberately well hidden and/or a safe distance away), a mature whitetail will use its senses to determine whether or not the site is again occupied by a hunter throughout the rest of its life. Moreover, accompanying deer will learn to do the same. Within my study area are several previously productive buck stand sites that have been routinely detoured by mature bucks and other whitetails for 5–15 years (revealed by tracks in snow).

For all of the reasons described above and in previous blogs, it pays to change stand sites every day or half-day, scout and finish preseason preparations 2-3 weeks before hunting begins and be as quiet, still and odor-free as possible while stand hunting. The best (most productive) of stand sites are those that have never been used before, require no preparations (except perhaps flattening some tall dead grass. pushing aside some dry leaves or pruning off a couple of twigs that might interfere with shooting) and are located well hidden within easy shooting distance downwind or crosswind of sites or trails currently frequented by whitetails. These are made obvious by very fresh deer tracks and/or droppings. The most rewarding of such sites are feeding areas (hubs of whitetail activities) and deer trails adjacent to feeding areas. Today, when a mature buck is an intended quarry, stand hunt within easy shooting distance of fresh 3-1/2 to 4 inch-long tracks and/or fresh 3/4 to 1-1/4 inch-long droppings at least a half-mile (six blocks) from where a motorized vehicle was parked before hiking on foot to the site.