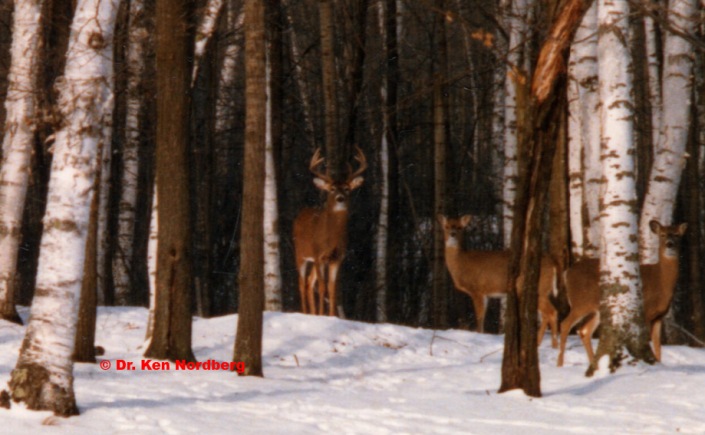 My father introduced me to whitetail hunting in 1945. That was long before tree stands, lure scents, cover scents, scent killers, camo head nets, hand warmers, rattling antlers, grunt calls, rifle scopes, compound bows, backpacked stools, portable blinds, camo and blaze-orange clothing, bait, corn feeders, GPSs, trail cams, snowmobiles, ATVs and OHVs became traditional deer hunting gear. As you might imagine, I’ve experienced quite a few changes in whitetail hunting, some due to my own efforts. The most remarkable change occurred in the 1980s and early 1990s, attributable to the introduction of portable tree stands and doe-in-heat buck lures. These innovations produced astonishing buck hunting success at first, but after nearly four decades of use by tens of millions deer hunters annually, most bucks and does 2-1/2 years of age or older now routinely identify and avoid hunters perched in trees and recognize the danger of airborne doe-in-heat pheromone accompanied by odors of hunters using them. Mature bucks are therefore as elusive as ever. Undaunted, whitetail hunters continue to make use of the growing deluge of old and new products that are claimed to improve buck hunting success.

Are such products really necessary to successfully hunt bucks? Based on my last 26 years of keeping track of numbers of mature bucks responding favorably or unfavorably to their use, I am now convinced many products that once enabled me to take quite a few braggin’-sized bucks are now likely making it easier for mature bucks to identify and avoid me. Whenever I give my favorite grunt call a try these days, for example, it seems as if bucks within hearing are saying saying to one another, “That might sound real but I can tell it was made by that human with the white beard. Let’s get outta here.” Though changes of this kind are surely disappointing, a certain overwhelming fact keeps me from throwing in the towel when it comes to hunting older bucks: for more than 10,000 years millions of North American deer hunters using primitive weaponry with no knowledge whatsoever of the products listed above routinely provided their families with venison, antlers to make tools and hides to make clothing and footwear. Rather than continue to rely wholly on old or new gimmicks, I decided back in 1990 to begin relying on truths gained from my whitetail studies instead and use them to develop more productive buck hunting methods.

Truths? Shortly after I began my 46 years of studying habits and behavior of wild whitetails, much of what I knew about these deer, learned from my father, uncles and outdoor magazines, turned out to be untrue. Beginning in the 1980s, many new myths (untruths) were added, some seemingly logical, intended to explain why whitetails do certain things, and some intended to convince deer hunters to purchase certain new products.

Just to give you a sampling of how myths continue to cloud whitetail hunting today, consider the following truths:

Antlered bucks are engaged in five different, breeding-related activities during a period lasting 4-1/2 months beginning with velvet shedding about the first of September.

Everything bucks and does do that is related to breeding, except possibly one, is triggered by certain ratios of darkness to sunlight (called photoperiodism), causing them to occur during the exact same calendar periods annually.

Does not bred in November experience heat again 28 days later and 28 days later again if still not bred, meaning does are in heat during three different two-week time periods during a ten-week span beginning in early November and ending after the first week in January.

Only 10–12% of does are in heat on any one day while breeding is in progress, meaning there is no peak of the rut. Each doe is only in heat 24–26 hours.

Does in heat do not deliberately urinate on ground scrapes to let bucks know they are in heat. Airborne doe-in-estrus pheromone emitted from does and their urine does that wherever they are located.

About 90% of scrapes and rubs are made during the 2–3 weeks before breeding begins, meaning bucks are not “really ruttin’” as so many hunters are fond of saying upon discovering freshly made ground scrapes.

Rather than attract does, buck ground scrapes are intended to serve as easily seen and smelled no trespassing signs to warn other bucks to stay away from intended buck breeding ranges.

No matter how high you are in an elevated stand, all whitetails 25–200 yards downwind smell you. Some, mainly lone, inexperienced fawns and yearlings, fail to recognize the danger and approach from downwind regardless.