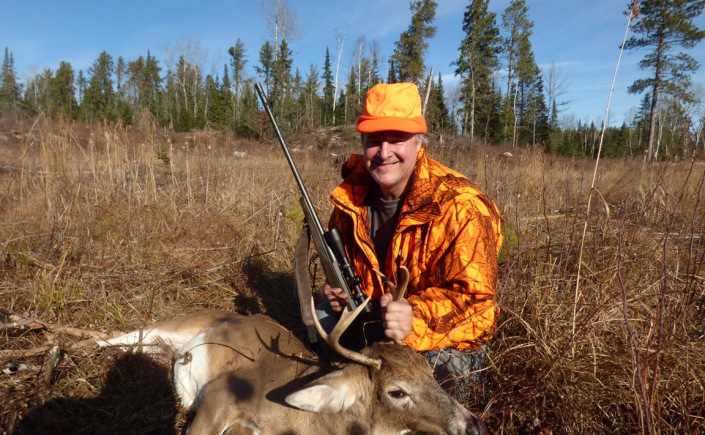 Every year, to keep our stand sites selected preseason from losing their hunting value before we have a chance to use them, we take time to remove dead branches from the deer trails we adopt as stand site approach trails and any others within 100 yards of stand sites. Then, while heading to our stand sites during hunting seasons, especially when within 100 yards, we imitate the exaggerated stepping of whitetails and black bears when they want to move silently: we bend our knees and raise our feet well clear of the ground and then ease them down softly with each step. It’s difficult to do if you don’t keep your mind on it all the way to your stand site. Meanwhile, we maintain a moderate, non-stop pace while keeping our heads pointed straight ahead, even in darkness because whitetails tails can see as well at night as by day. While making no heavy footsteps, not dragging our heels across rocks or pebbles or through dead leaves and grasses and not stepping on dead branches that snap loudly underfoot, though whitetails currently feeding in the vicinity of your stand site ahead may nonetheless occasionally hear your soft footsteps, they will not be able to positively identify what is making those footsteps. If you were to halt often to listen and scan ahead, still-hunting along the way, though it may be difficult for whitetails ahead determine what is making the footsteps they hear, your ominous short periods of silence during each pause will likely brand you as a dangerous hunter, after which which your stand site and the adjacent feeding area can immediately lose their hunting value for the rest of the hunting season. When deer feeding ahead cannot see you approaching because dense forest cover or high terrain is between you and them all the way to your stand site, when they cannot see the beam of your flashlight because you turned it off before it could be spotted by them, when they cannot smell you because you are downwind or crosswind of them and when they cannot be sure about what is making the occasional footsteps they hear, though they may remain curious and extra alert for a while and may even temporarily move out of sight of your stand site, they won’t abandon the area. Thirty minutes or so after you arrive and become motionless and silent, they will likely be seen feeding and slowly moving in your direction. This happened to my son John at a feeding area last November, finally giving him an opportunity for an easy shot at a mature buck less than 50 yards from his blind.

For about fifty years I’ve always maintained the best parts of hunting mature bucks are planning for it beforehand and talking about it afterwards, the part in between being mostly hard work. But, if an 82 year-old man like me can continue doing it without any ATVs or OHVs in camp, you can do it too. Actually, once you become successful at it, the part in between is no longer hard work. It’s fun.

There are several other fun things we Nordbergs do when preparing to hunt or while hunting near feeding areas when breeding is in progress. While searching for stand sites before or during a hunting season, for example, we don’t settle for one that is not adjacent an existing deer-trail that courses through dense forest cover or behind intervening terrain that will keep us hidden from feeding deer all the way to the stand site. Where I hunt, such a prerequisite is easy to find. At an especially promising feeding area discovered preseason — it and the forest around it full of fresh buck and doe sized tracks and droppings — we commonly select two stands situated ninety degrees from one another (one on one side and another at an end) so we can approach the feeding area from downwind or crosswind and sit downwind or crosswind (never upwind) whatever the wind direction. Rather than being forced to wait to hunt at a special site because of an adverse wind direction, the extra work of finding another stand site and cleaning a deer trail leading to it is worth it because we can then hunt the site there whenever we want. Another of our rules I occasionally wish I hadn’t ignored because I was in a hurry is, never cross a feeding area to get to a stand site on the opposite side. Always go around. We never approach a stand site with the wind at our back and we never count on something in a bottle that is supposed to make it possible to do this without being smelled by downwind deer. When hunting a big buck, we never take chance like that. We always approach from and sit downwind of a feeding area in the morning because the deer we hope to see will already be there, generally beginning feeding two hours or more before first light. We always approach a feeding area from crosswind in the afternoon and then sit crosswind because whitetails almost always approach feeding areas after we get there from downwind. To minimize the possibility of being seen or heard while approaching a stand site near a feeding area in the afternoon, we plan to arrive at our stand sites by 2 PM, well before whitetails are likely to arrive. Years of study taught us never-used-before stands on the ground or in a tree 10 yards or more back in forest cover from the edge of a feeding area (with 2–3 natural shooting windows, no man-made shooting lanes, in between) are much more productive than stand sites located at the very edge of a feeding area. Stand sites with a solid background of natural, unaltered cover are also much more productive than stand sites with little or no background cover, especially when the background is primarily sky or a snow-covered hillside. Small masses of cover can be every bit as effective at hiding the hunter as large masses of cover as long as the hunter’s background is fairly solid and intervening cover masks the hunter’s silhouette shoulder high (while seated on a backpacked stool) and hides motions necessary while preparing to fire at a deer. During the past ten years, single six-foot evergreens or a red oak with retained dead leaves, a camo headnet to cover the bright skin and white beard of my face and a solid background of tree trunks, brush, a boulder and even tall grasses have been enough to provide me with very easy shots at some of the biggest bucks I have ever taken. Good cover and camo headnets have also enabled my three sons, two daughters and two grandsons to take many unsuspecting trophy bucks at very short range, one only 25 feet from my youngest daughter, Katy, one only 11 feet from my oldest daughter, Peggy, and another only three feet from my son, John.

It’s graduation day! You have been taught all you need to know to successfully hunt mature bucks during rut phase III, the two-week primary breeding phase of the rut in November. All the tips that took us so many years to for my hunting partners and I to realize that were sared with you in this and previous blogs have served my family of avid bucks hunters and me very well, enabling us to enjoy the best whitetail hunting of our lives despite low deer numbers, excessive numbers of wolves and unexpected directions and mile-long movements made by the largest bucks in our hunting area.

Actually, despite the number of fawns they prey on each summer, the number of half-days of hunting they have spoiled by unexpectedly spooking bucks away from my stand sites and the degree to which they have made our whitetails extra alert and elusive, I like wolves. I enjoy hearing their howls each evening at sunset. I feel privileged to have been often visited by them. I feel blessed for what they have taught me. Though I realize their numbers must be reduced for their sake and the sake of their primary prey, our white-tailed deer and moose, I hope they will always be a part of the boreal/Canadian Shield wilderness we share and cherish, an area I hope many generations of my family will also cherish and often be thrilled by the mournful howls of our magnificent grey wolves.