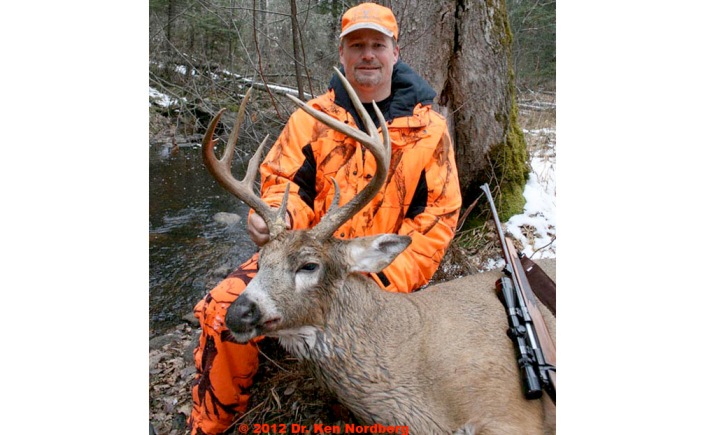 I often receive letters from hunters who hunt where the wind direction often changes daily, making it difficult to avoid being smelled by nearby deer. During the 72 years I have hunted whitetails, I have tried just about everything to avoid being smelled by whitetails, things I have been recommending to hunters in books, magazine articles and seminars since 1970. My latest letter was written by a hunter who in addition to washing his hunting clothes and body with scentless soap (which is good), uses fox urine as a cover scent. Back in the 1980s my hunting partners and I routinely used fox urine and it worked for several years, even occasionally attracting bucks to stand sites. The trouble was, beginning in the early 1990s it was becoming evident many of our mature whitetails had learned hunters smell like fox urine, airborne doe-in-heat pheromone is dangerous if accompanied by human odors and it is wise to check out sites where rattling antlers and grunt calls are heard from downwind before moving near.

My sons and I eventually discovered most mature whitetails are not particularly fearful of upwind hunters if they are stationary, silent and do not emit strong and unusual odors, in which case they are very unlikely to abandon their home ranges. However, once a stand hunter was identified by mature whitetails by any means, they kept a safe distance away from the stand site throughout the rest of a hunting season. To counter this, my sons and I began changing stand sites daily and even twice daily, making it very difficult for even the most wary of bucks to continuously avoid us.

Avoiding being smelled can be difficult and frustrating in areas where wind directions often change during the day, due to winds being funneled in different directions by high hills or mountains, directions depending on velocity, and due to horizontal or vertical eddying between or downwind of high hills. At such sites, my hunting partners and I hunt high in the morning (at sunrise air begins flowing uphill on a quiet morning) and lowl in the evening (air at tops of high hills cools first on a quiet evening and flows downhill).

Despite inevitable changes that favor whitetails, we stick to three rules that have long greatly improved our odds for buck hunting success: 1) always hunt close to very fresh deer signs made by mature bucks, 2) get to our stands one hour before sunrise and 3) do our best to quietly approach our stands nonstop from downwind or crosswind and sit downwind or crosswind of where we expect to see a buck. Sure, these rules do not always work and, sure, some bucks prove to be impossible to hunt, but they only need to work once per hunting season to provide regular hunting success. Since 1990, these rules have enabled my three sons and I to take 98 mature bucks on public land where deer numbers have always been low due to enormous numbers of grey wolves and occasional severe winters. About 80% of these bucks were taken during the first two legal shooting hours of the day.