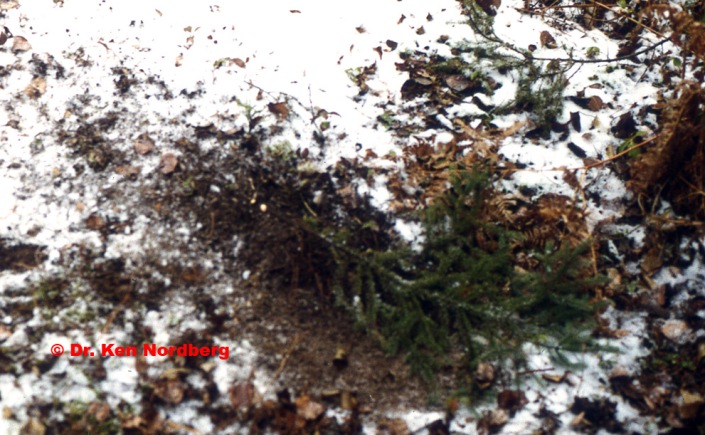 The first of the three two-week periods during which whitetails breed begins in early November, generally the 3rd where I hunt. About 85% of mature and yearling does are bred during this period. Ordinarily, few buck ground scrapes are renewed at this time – a sign indicating breeding is in progress. Occasionally, however, one is renewed. It’s almost rare. If a scrape appears to have been vigorously pawed by a buck minutes or an hour earlier, an overhanging branch or bough perhaps freshly ravaged by antlers as well, not only does this scrape have a very special meaning, but if properly hunted, the hunter is very likely to experience a very exciting opportunity to take a big dominant breeding buck within fifteen minutes to four hours.

The special meaning is: 1) a dominant breeding buck, one of the biggest bucks in your hunting area, is near, 2) it is accompanying a doe in heat, 3) the big buck is furious because another buck refuses to quit closely following the pair and 4) the scrape upon which it vented its rage happened to be handy.

If you were hiking to or from a stand site in a manner that does not alarm deer along the way, you may not have ruined your chance to take that big buck soon after discovering its scrape. Knowing this, whenever I come upon such a scrape (commonly spotted ahead in the beam of my flashlight before first light in the morning), I immediately halt (keeping well away from the scrape), back cautiously away (keeping my flashlight pointed straight down), heading off-trail downwind or crosswind until twenty or more yards away at a spot where I will be well hidden by natural cover (sometimes a mere six-foot evergreen tree). There I silently sit down on my stool, pull down my camo headnet and plan to sit very still up to four hours. Only once have I had to wait four hours. The bucks I envisioned I’d soon be seeing sometimes showed up within 15 minutes.

Why do bucks return soon to such scrapes? I believe they return to further renew the appearance and intensities of their musk odors characteristic of scrapes: musk washed to the scrape via urine passing through the tufts of fur covering their tarsal glands and musk originating from their scalps, rubbed on overhanging branches or boughs, thus intensifying the warning to stay away – scrapes are intended to provide such warnings to other antlered bucks. Patches of much-trampled turf or snow where two bucks battled are not uncommon near such scrapes in November.

Typically, bucks appear at such scrapes with no warning whatsoever. Suddenly, there a buck will be, applying scalp musk from a side of its head to a branch above it scrape or standing with all four hooves planted on the scrape, hind legs pressed tightly together, rump wagging from side to side and the buck urinating on the inner surfaces (tarsal glands) of its hind legs. When caught unprepared to fire, it’s always a nerve-racking challenge to raise a rifle or bow without being seen by the buck. The two times I was spotted while doing this, the buck disappeared within the blink of an eye during its first or second giant leap through boughs of evergreens 8–10  feet above the ground – a sight you never forget.

Note: by now you are beginning to realize the tips I have been providing in my blogs have unusually great hunting value. All are based on my more than a half-century of hunting-related research with wild whitetails over much of America and 74 years of deer hunting. Though I try, it is very difficult to provide comprehensive information about whitetails and whitetail hunting via blogs (or my YouTube presentations) alone. My current best source by far for such information is my just published (available in a few days) 518 page, 8″ x 10″ Whitetail Hunters Almanac, 10th Edition which has about 400 instructive photos and diagrams.  When you get a chance, check it out.