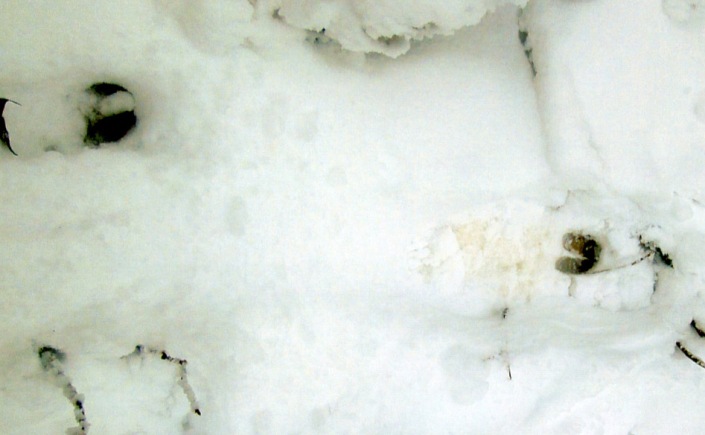 Whitetails of my study/hunting area in northern Minnesota are hunted by grey wolves year around, by mated pairs of wolves that kill 3 of 4 fawns between May and November each year and by packs of six or more mature wolves the rest of the year. Bucks that have survived two or more years of such hunting – 2-1/2 to 6-1/2 year-olds (7-1/2 year-olds are rare) – are the class of whitetails my three sons and I hunt exclusively. Though most other hunters in surrounding areas rarely see such deer, my three sons and I have taken 97 since 1990.

One of the most intriguing things I learned about mature bucks during my half-century of whitetail studies is, they are actually willing to share trails used by hunters…up to a point. When it becomes too difficult for them to maintain safe distances from hunters because hunters are too numerous and/or aggressive, making drives and/or wandering everywhere within their ranges, mature bucks are the first deer to abandon their home ranges or become nocturnal. Upon discovering the trail sharing peculiarity of older bucks, my sons and I began hunting in a manner designed to minimize alarming all whitetails and also minimize the spread of lasting human trail scents in our hunting area by using the fewest possible trails during hunting seasons. This doesn’t mean we each use one stand site each per hunting season. Quite to the contrary. Because today’s mature bucks are so skilled at finding, identifying and avoiding stand hunters in trees or on the ground, most often without stand hunters realizing it, we switch stand sites twice daily, only occasionally using a previously used stand site a week later in a hunting season. All of our stand sites are at ends of relatively short lengths of existing deer trails that connect to one widely looping trail (a series of connecting deer trails we call a “cruise trail”) in every half to full square-mile we hunt. Though we search widely while scouting two weeks or more before each hunting season begins, we use no other trails during a hunting season and each stand site approach trail is only used once, sometimes twice per hunting season. This allows our whitetails to live fairly normal (predictable) lives in sizable portions of our hunting area throughout hunting seasons, keeping them vulnerable to “skilled” stand hunting until the last day of a hunt.

Our “minimally-alarming (least aggressive)” hunting method is “stand hunting,” more at ground level than in trees. An unavoidable hazardous part of stand hunting is getting to a stand site on foot (never using noisy and stinky motorized vehicles for this). For stand hunting to be productive, this hike must be done without alarming or alerting whitetails, mostly unseen, along the way. To do this, while heading to a stand site we walk like gray wolves walk when searching for scents of vulnerable deer. To avoid immediately alarming potential prey and other deer along the way, our wolves avoid any display of hunting behavior by walking nonstop along deer trails with their heads pointed straight ahead. Upon discovering airborne or trail scents of a deer slowed and made vulnerable for some reason, they continue moving past, acting as if only interested in reaching some distant destination. Not until out of sight and hearing and downwind or crosswind do they halt to begin stalking a selected prey.  Upon spotting a wolf, wolf pack or hunter passing in this manner, our mature whitetails do not unnecessarily waste energy by bounding away. If a passing wolf or human does not appear to be hunting or does not appear to be interested in them, they are most likely to simply freeze (usually in cover) and watch the wolf or hunter pass, resuming whatever they were doing after the wolf or hunter is out of sight and hearing. Our whitetails do not react with great alarm unless it appears obvious the wolf has chosen them as a prey or soon will, being headed in the deer’s direction, Ordinarily, not until a wolf is discovered stalking toward a deer, sneaking and often pausing to scan ahead and listen, will a mature whitetail react by bounding away with all possible speed.

Human hunters are different. Many act as if they are hunting for vulnerable prey full time. Human hunters sneak (stalk) full time, often halting to scan ahead and listen. They often show an interest in fresh deer tracks, stare in a deer’s direction though they may not realize a deer is staring back at them and they often turn unexpectedly from their paths toward a hidden (frozen or bedded) deer. Any of these actions imply to experienced whitetails they have chosen as a prey,  in which case they will abandon the area quickly and noisily or slowly and silently. after which they are likely to widely avoid the area for the rest of the hunting season.

My hunting partners and I deliberately avoid displaying hunting behavior during hunting seasons in sunlight or darkness. Like wolves in search of vulnerable prey, we walk non-stop with our heads pointed straight ahead whether on our stand site approach trails or widely-looping cruise trails. By doing this, our mature whitetails react upon discovering us approaching or passing on deer trails exactly as they react upon discovering grey wolves approaching or passing on deer trails.

Mature whitetails identify hunting humans three ways: via sight, hearing, and smell. While on the way to a stand site we use dense forest cover and intervening terrain to avoid being easily seen by deer in the vicinity of our stand sites. We clear dead branches from our stand site approach trails before each hunting season, walk non-stop at a moderate pace while hiking to a stand site, not dragging our heals, and we bend our knees, raise our feet well clear of the ground with each step and then placing them down lightly to avoid being heard as hunting humans by whitetails ahead. To avoid being identified by smell, we always approach from downwind or crosswind and sit downwind or crosswind of where we expect to see whitetails. All season, we key on fresh tracks and/or droppings very recently made by mature bucks on deer trails or off-trail adjacent to whitetail feeding areas – sites here they are more likely to be seen than anywhere else, right now, later today or tomorrow morning. Don’t count on it after that.

As we eventually discovered, keeping from being identified by smell by mature bucks on the move and avoiding likely consequences is a lot more complicated than we originally realized (see next blog).