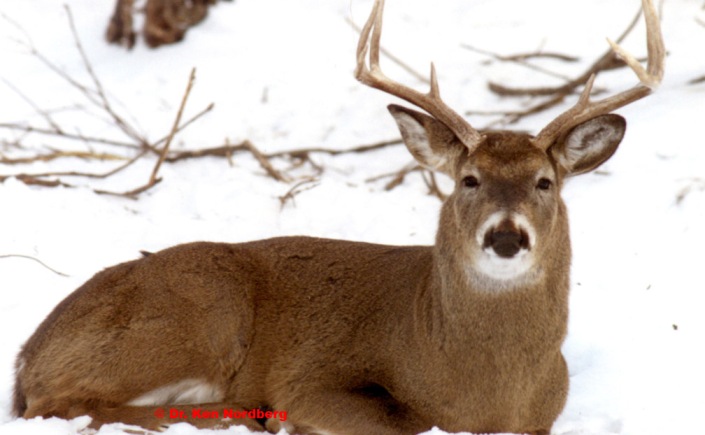 During the early 1990s, tracks in snow revealed mature bucks in my study/hunting area were going out of their way to avoid many of our previously used tree stands and ground level blinds, whether in use or not, including those many used only once for a half-day. Because my sons and I routinely take special care to ensure we are well hidden and downwind or crosswind of trails or sites where we expected to see a buck, it was difficult to imagine why this was happening. Deer tracks in snow finally provided a long ignored reason. During a day of stand hunting, bucks are as likely to pass downwind as upwind without the hunter realizing it. When they pass unseen within 200 yards downwind, upwind hunters are readily identified and easily avoided. Via airborne scents alone, mature whitetails can also accurately determine the hunter’s location, whether or not the hunter is moving and in which direction. Experienced whitetails today apparently realize a hunter whose source of airborne scents is not moving is a “stand hunter,” therefore harmless as long as a safe distance is maintained. Tracks in snow in my study area have often revealed some young and older downwind bucks and does will sneak near enough to take a look at what the hunter is doing. I’ve known several bucks that went out of their way to pass downwind of stand sites I had used before, doubtless to determine whether or not I had returned. Some even bedded downwind where they could monitor any move I made from my stand and the direction I took when I departed. The point is, in addition to any seen or unseen upwind or crosswind deer that may have identified us because our dark silhouettes were clearly visible against the sky or a background of snow or because of because of motions or sounds inadvertently made, lots of downwind deer that lived within the surrounding square-mile had learned all they needed to know to avoid us and our stands for the rest of the current hunting season and more. To minimize wasting time at stand sites soon avoided by intended quarries, my sons, grandsons and I began switching to new stand sites, always in sight of very fresh deer signs made by the same or other mature bucks near locations where they normally spend most of each day, namely 1) current favorite doe feeding areas and buck scrape routes along which scrapes are renewed every 24–48 hours during the 2–3 weeks before breeding begins in early November, 2) current favorite doe feeding areas early and late in the day and doe bedding areas midday during the two weeks does are in heat and 3) current favorite feeding areas of mature bucks and sometimes bedding areas of older bucks beginning mid-November. All stand sites we use are 100 yards or more apart from previously used stand sites.