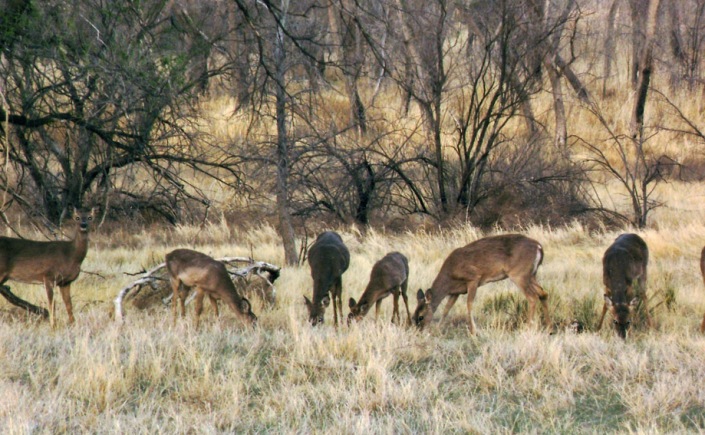 Caption: Why feeding areas have so many tracks and droppings. (Texas whitetails.)

Whitetails spend nearly half of their lives feeding. They feed twice, sometimes three times, daily. Accordingly, there are more deer signs in feeding areas than just about anywhere else (except where whitetails are concentrated in wintering areas). If you are interested in becoming a more successful whitetail hunter, there is one overwhelming reason why it is important to be able to identify whitetail feeding areas: whitetails are most easy to see while they are up and moving about, feeding and traveling to and from feeding areas. Almost everything else they do while not bedded, including drinking water and engaging in rut related activities from early September to early January — including bucks sparring and battling to gain dominance, making or renewing ground scrapes and antler rubs, dominant bucks searching for does in heat and lesser bucks intruding in their breeding ranges and breeding — occurs during hours whitetails normally feed. Whitetails are most difficult to see while they are bedded, typically motionless (except for cud chewing), well hidden and stubbornly refusing to do anything else.

The deer signs that most make whitetail feeding areas obvious are lots of off-trail deer tracks and droppings, fresh and old among vegetation they normally eat — green grasses and leaves in summer and early fall (also acorns) and woody stems of various shrubs and saplings in late fall and winter. Heavily trampled patches of soil or snow reveal where antlered bucks have battled late during feeding cycles. Evidences of feeding may not be obvious until whitetails begin feeding on stems of woody shrubs and tree saplings in late fall, white ragged tips then becoming prominent. Look for lots of broken shells of acorns beneath oaks.