It being nearly impossible for still-hunters to avoid being easily recognized by experienced whitetails 100–200 yards away, the next best thing to do, aside from making your footsteps as silent as possible (never dragging boot heels) is quit sounding as if you are hunting. Rather than stop often to scan ahead, don’t stop at all between spots to sit still for a while.

Having 36 years experience as stand hunter who regularly takes mature bucks, and having amassed a consider number of observations of reactions of mature whitetails being approached by hunters since 1970, the tip I will now share with you is absolutely true. Whitetails of any age that cannot positively identify you as a hunting human via your approaching footsteps will not abandon the area — a feeding area, for example. They may move off a bit and remain hidden for a while, but rather than react with alarm, they’ll generally react with curiosity, anxious to discover what is making those difficult to hear sounds. If you approach from downwind or crosswind via a deer trail relatively clear of dead branches (cleaned preseason) that courses through dense cover or is hidden by intervening terrain, walking softly and not halting along the way — thus making sounds that indicate you are not hunting and therefore likely harmless — those deer will nonetheless wait to make sure of this before resuming feeding. After making it very difficult if not impossible for those deer to identify you via airborne scents, motions or sounds while walking your stand site, if you then become absolutely silent and move your head very little and very slowly, within 30 minutes those curious deer will decide whatever you were you were not dangerous and likely no longer near, after which they will resume feeding, then becoming visible and moving slowly — easy targets. 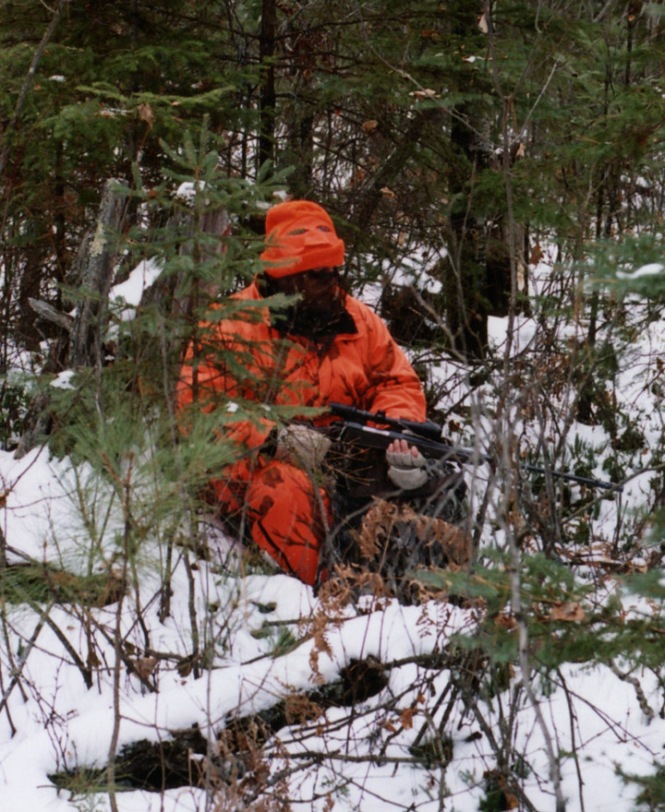 To be a regularly successful still-hunter, then, you should walk non-stop as silently as possible from a place where you sat still for a while to the next place to be still for a while. How long should you remain still at each of these places? Normally, as you now realize, your odds for success will only begin to improve after your first thirty minutes of being still has passed. For each hour you remain silent and still, your odds for success will usually peak only during the final thirty minutes. Surely you can sit patiently enough to enjoy thirty minutes of much improved hunting odds during every sixty minutes you sit still.

The best places to sit still for an hour are 100–200 yards apart, sites where there are fresh deer tracks and droppings nearby, upwind or crosswind, and where you will be well hidden (while wearing a camo headnet) by natural, not recently altered cover with a solid background at ground level — easily, comfortably and silently done by sitting on a back-packed stool. Rather than merely attempting to improve your odds for hunting success by wandering greater distances during a day of hunting, you will actually much improve your odds by becoming very difficult for those 15–30 deer living in the square-mile mile ahead to identify and avoid you. On the average, eight or more of those deer will be within easy shooting distance of some of the places where you sit still per mile you proceed on foot into the wind or crosswind. Imagine that! Before long you will be thanking that unknown guy who long ago invented such a great way to hunt whitetails. Though other hunters, especially stand hunters, in the area may not thank you, they should because unlike other still-hunters you won’t be chasing deer out of the area, giving everyone a better chance for hunting success.