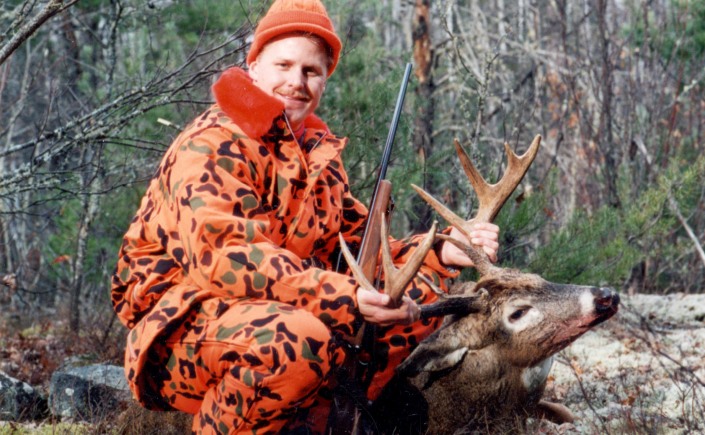 The biggest bucks in your hunting area are dominant breeding bucks, meaning they are dominant over all other bucks living within their ranges and while does are in heat, they breed all mature and yearling does living within their ranges. Most are 4-1/2 to 6-1/2 years of age. Their home or breeding ranges are generally about a square-mile in size. A few particularly aggressive bucks have home/breeding ranges up to two square miles in size. Within a square mile dominant breeding buck range live 14–29 other deer, depending on deer numbers and habitat. Four or five are mature does with young, fawns and yearlings, living in separate home ranges averaging about 125 acres. Three to five are other mature bucks, 2-1/2 to 6-1/2 years of age. Very few live longer, though rarely taken by hunters. These other bucks have home ranges that overlap with other buck ranges, each encompassing 2–4 doe ranges, generally 250 acres (typical of 2-1/2 year-old bucks) to roughly 500 acres in size. The one deer that best knows and utilizes the entire square mile, then, is the dominant breeding buck, typically claiming the most secure bedding area and using all other deer in its range like radar to avoid danger.

Now then, let’s assume you are a skilled and knowledgeable buck hunter (though you might not realize it yet), meaning you stand hunt only at sites in vicinities where signs such as fresh mature-buck-sized tracks, droppings and/or freshly made or renewed ground scrapes are currently found. This is a good first step because dominant breeding bucks do not utilize all deer trails, watering spots and feeding areas within their square mile every day. Stand hunting where one is active right now logically improves your odds of taking such a buck.

The trouble is, dominant breeding bucks survive to their typical ages by being  superior to all other whitetails at locating, identifying and avoiding hunters. The easiest of hunters for them to avoid are those who continuously move about on  foot. Such bucks typically find and begin avoiding stand hunters located anywhere within their ranges within the first three feeding periods of a hunting season, usually without the hunter realizing it. As long as they keep safe distances away from typically stationary, non-aggressive stand hunters during hunting seasons, they obviously know it is safe to maintain normal habits elsewhere within their ranges. When determined to take a dominant breeding buck or any other mature buck 3-1/2 to 6-1/2 years of age, therefore, unless you take the buck at your original stand site by noon of the second day of a hunting season, you are generally wasting time hunting at the same stand site.

More trouble is, when a stand hunter is knowledgeable and skilled enough to actually be at a location where a buck one of these ages is near right now, the odds of being discovered and avoided by that buck before the hunter realizes that buck is near favor the buck. During the rest of a hunting season, therefore, to keep close to that buck or any other mature buck (by then they are fully aware it is being again hunted by you), you must skillfully switch to another previously unused stand site within easy shooting range downwind or crosswind of other very fresh tracks and or droppings made by the same or another buck (or a freshly made or renewed ground scrape) 100 yards or more from any previously used stand site every day or half day — the basic recipe for becoming regularly successful at hunting mature bucks. Sooner or later, you will then spot a mature buck within easy shooting range before it realizes you are near.

Yes, it can be done routinely. To learn how, keep tuned.